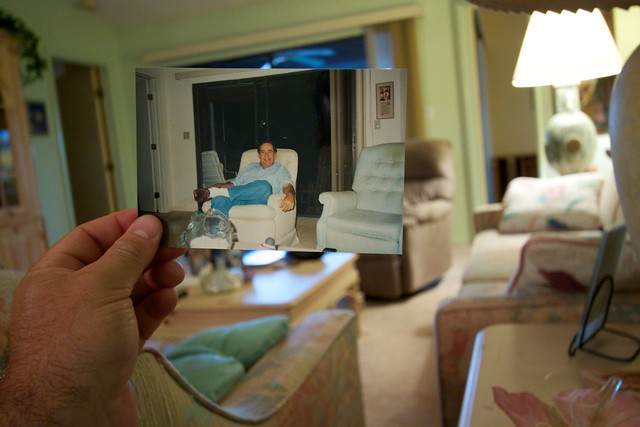 This is a story that starts with the Pope, which is a surprise to me. I have no faith. Here is now.

In 2015, writing to “every person living on this planet“, he said this:

True wisdom, as the fruit of self-examination, dialogue and generous encounter between persons, is not acquired by a mere accumulation of data which eventually leads to overload and confusion, a sort of mental pollution.

This is a story about a chair where someone once was.

This is a story about a blog that is no longer being written.

Alan was one of the first people I encountered who knew why telling generous stories on the open internet was what made new things possible. Alan was using his photographs to think about how furnishings are haunted by people who have stepped away, who are no longer here.

I remember that first post, and how it felt to be invited in as a passing stranger to someone else’s family history. I have it bookmarked in memory because that was my internet, the place of generous encounter between persons who decide in a heartbeat how to treat each other.

Alan has gifted me an image that is part of his family story, and in a way, part of that room, that I remembered also having seen once. It’s not the one in my mind’s eye. It’s one that’s here now.

All of this is possible because we have a human capacity to be one another’s witnesses. Sometimes we try to find fault with this, but really it’s our hereness that puts something human into all our formalised and bureaucratic practices, our institutions.

We are willing to pay deep attention to strangers, not just so that we can get strangers to do things for us, or like our things, but because in attending to each other we assert a practice of being human that soars beyond analytics.

“I’m here” is something that we can only say for a short time.

In December 2013, while I was staring at a screen trying to make words make sense, I noticed a tweet, that’s since been deleted. “Please read my wife’s blog,” it said. I had just found out I had a significant cancer, on my way to Christmas shopping. I was unmoored. I felt that someone else who was ill might be important to read.

I read Francesca’s blog about her experience of illness, and I thanked her for writing it. Like me, Francesca was a mother of three kids, and like me her thoughts were about what it would mean to them if she wasn’t able to stay alive.

We read each other’s pieces of writing, and kept each other in view. We each wrote our way through 2014 and 2015, surviving, mothering, holding on, imagining what would happen if we didn’t.

One day she wrote about us on her blog.

In 2015, while Francesca and I were still writing, the Pope wrote that our common home could not be the digital world. He said this:

when media and the digital world become omnipresent, their influence can stop people from learning how to live wisely, to think deeply and to love generously.

Francesca’s writing was generous, deservedly celebrated, and I loved it.  She helped me to live wisely through two tough years, and her writing still helps me think deeply. We met in the world made possible by digital networks, that is not just a digital world any more than our earth is just rock and soil.

Wherever humans encounter each other generously we make more human worlds; these worlds will all hold parts of us after we have gone.

In October 2015, Francesca stopped writing The Not Me, although sometimes she would show up elsewhere. She stopped using Twitter, the only place I knew to find her.

From time to time, I go looking for her, checking that she is OK, that she is still here. The kinds of websites that search for us all via our connection to the civic webs of property ownership, court records and genealogy suggest that she is living, as I am.

If you visit Francesca’s blog, remember you are in a place of thenness, not hereness. Visit quietly, this was a time.  Visit carefully, if stories and thoughts of dying and loss are close to home for you.

In December 2014, a year after we ran into each other on the internet, Francesca wrote about what a year of blogging meant to her. Her answers are for anyone who thinks about contributing to the open internet, wondering if what you share will be found, and found useful.

Before I started this blog, I knew I would feel afraid and would worry about failing as I tried to do something totally new. What I didn’t want to admit at first, or maybe I just didn’t know how to identify, was that I could never have started this blog or made the choice to share some of my most personal experiences if I had been entirely hopeless about how people would respond. It turns out that I needed both my fear and my hope in order to take the risks that I did.

We are here. Here we are.